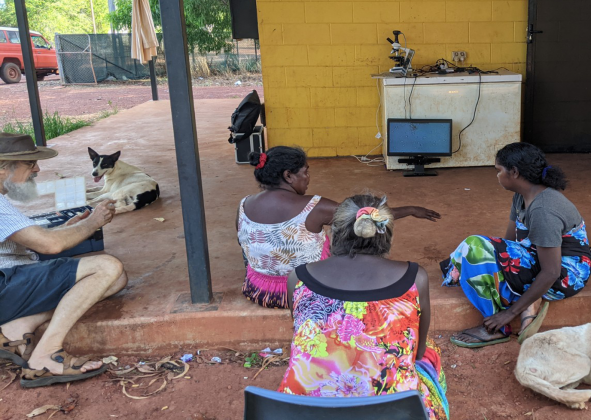 Just telling Aboriginal people to get vaccinated will not work!

When people don’t know what a virus is, just telling them to get vaccinated will not work. It also makes them more vulnerable to conspiracy theorists and anti-vaxxers.

For over 12 months now, Richard Trudgen of Why Warriors has been warning of a nightmare in the Northern Territory caused by a lack of underlying fundamental education across Aboriginal communities. Unfortunately, no one else with the resources is listening, including the Aboriginal Medical Services.

Most Aboriginal people view the living world in terms of the animals and plants in their living environment. Bacteria and viruses are not seen in the same way as all the other living things around them. Instead, they are viewed as mystical, out of their immediate concern and control. So they accept the view, “We should just trust in God” as the only reality.

Most traditional Aboriginal people across the Northern Territory, some other Aboriginal communities, and many migrant communities across Australia do not have the same knowledge of germ theory that most mainstream Australians have.

They do not see bacteria, germs and viruses in the same way. When many are asked what picture they get when they hear the word bacteria, germs or virus, they will respond by saying, “Just the actual words themselves, no other picture”.

Good germ theory education makes bacteria, germs, and viruses come to life in the mind. People are then very interested in controlling them, just like other dangerous animals in the bush around them. This is not rocket science, but it is life-changing.

Aboriginal people, like all others, need answers to their questions. And their questions will be very different from those in mainstream Australian culture.

So 18 months ago, Why Warriors started producing a series of videos to answer people’s questions in the local Yolngu Matha north-east Arnhem language with English/translation to get ahead of the crisis that we could see was coming.

Despite having all these good resources and the knowledge and know-how to explain bacteria, germs and viruses in a real culturally competent and culturally safe way, our education programs remain unfunded.