Getting Yolngu Into Business

In 2014 Richard Trudgen wrote a major report called “Getting Yolngu into Business”. The report covers a brief economic history of the Yolngu people, looking at many blockages and solutions involved in creating a level playing field for Yolngu to get into business. The document includes a number of appendixes including the economic words and concepts of the Yolngu people clearly showing that Yolngu have a rich economic language.

A copy of the 77-page report is available at https://www.whywarriors.com.au/2014/07/getting-yolnu-into-business/ 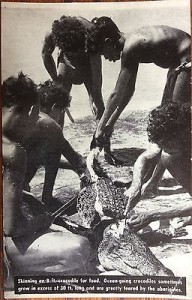 The reports also lists over 50 different industries that could be operational in many different locations across the north-east Arnhem Land.

Yolngu want businesses on their own lands so their young people have something other than welfare to look forward to. Despite what many people understand about Yolngu culture Yolngu people come from a long line of business people. Before the South Australian Government (SA) closed centuries-old international Macassan trade in 1906 the whole Yolngu economy was based on independent businesses.

This action by the SA Government decimated their traditional economic system. The Macassans once came for trepang and Yolngu produced natural pearls and traded them across Asia through the Macassan traders. Today the natural pearling and the trepang industry is worth hundreds of millions of dollars across the world.

In 1972 the free-range crocodile skin industry was also closed down by the Commonwealth government. This was mainly due to overshooting crocodiles by Balanda[1] crocodile hunters from Darwin. This was one of the last remaining industries that allowed many Yolngu families and clans to be economically independent on their own homeland yirralka estates.

Today almost all these industries are in the hands of Balanda in Darwin. If Yolngu still had these industries today they would have had a powerful platform from which to grow economic development over the last century.

Sadly in the 100 years since then, Yolngu have been pushed away from businesses toward welfare and the mainstream Australian view of Aboriginal culture.  However, Yolngu want to return to being business people like they were before.

So industries need to be kick-started. Not partnerships with big or little outside corporations that just pay another form of welfare called royalties or dividends. Yolngu people need businesses that are in their hands and control. Where the harder they work the greater the return. Where all the other positive associations with having to run a business add to their personal experience and corporate knowledge.

Running their own business changes the conversation in Yolngu families from a focus on government payments to family and clan-owned products and services and how to create more products that people want or how to add value to what they are already trading. Businesses that give meaning and reason to a good education.

From the many conversations with Yolngu people right across Arnhem Land it is obvious there is a lot of interest in the return of these age-old industries, plus some new ones.

So Yolngu can be in full control of any business development on their land we need industries where:

At the moment conversations are being held with many Yolngu clan and family elders over a large area of Arnhem Land. But funding is needed to get the work off the ground.

Why Warriors is looking for partnerships to help us develop these industries with Yolngu. If you feel called to help us then please contact us.

To read more, click here for the full report: Getting Yolngu into Business

Donate online to “Getting Yolngu into Business”.

[1] Balanda:  Balanda comes from the word “Hollander”, from the Yolngu contacts with people from former Dutch colonies in Asia; and is used to refer to European or English-speaking “Western” person or people.