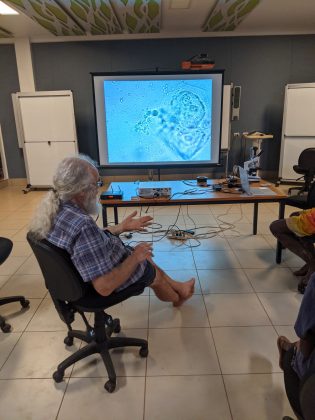 The team at Why Warriors have just finished a highly successful one month-long community education program, working together with Yolngu clan and family leaders in Galiwin’ku, north-east Arnhem Land. These cross-cultural community education workshops gave Yolngu people direct answers to their questions, in their own language, turning vaccine hesitation into a community of people who actually wanted to be vaccinated!

One key issue stood out in the education sessions that is vital for changing the situation in other remote communities across the nation. Richard Trudgen, founder of Why Warriors and author of the seminal book, Why Warriors Lie Down and Die, asked Yolngu workshop participants, “what picture do you get in your mind when you hear the words ‘germ’, ‘bacteria’ or ‘virus’?” The majority of Yolngu people responded with “yan dhäruk!”, just a word. They had no mental picture of the tiny living disease agents that could multiply in their bodies and make them sick.

This is impossible for most mainstream, English-speaking Australians to understand because it differs so greatly from their own experience. Most mainstream Australians have some degree of understanding of germs, bacteria and viruses – that they can multiply and spread from one person to another in saliva or mucus droplets.

“Aboriginal Australians who do not speak English as a first language, have this huge knowledge gap. And it also exists in Aboriginal populations where they speak a form of Aboriginal English or Creole. It depends on whether that group of people have been taught germ theory information or not.”

In remote communities like Galiwin’ku, where most people speak English as a fifth or sixth language, almost no one has thought of bacteria or germs as living things. Microscopes have therefore been utilised by Why Warriors in their education program to help show Yolngu what moving bacteria in saliva looks like. By conducting this carefully managed microscope education in local language, led by the particpants themselves, they can then relate the breeding of germs and subsequent spread of viruses to similar events in the animal world. This is effective because most Yolngu people know and understand the behaviour of animals in their living environment better than most mainstream Australians.

Without germ theory education, there will be no clear picture as to what Covid-19 is for many First Nations Australians.

This is the main reason why so many Aboriginal people become vulnerable to conspiracy theories and anti-vax propaganda. It is also the reason why the health gap between Aboriginal Australians and mainstream Australia never closes.

Why Warriors have now produced a series of 32 podcasts and 30 videos about Covid-19 in Yolngu Matha language, to answer people’s questions down to a biomedical level. For example, questions such as: what does “Covid-19” actually mean? and what is in the vaccines?

These resources are now being used together with face-to-face education workshops across north-east Arnhem Land. For more information, read the Why Warriors Community Education Proposal, or directly assist with equipment such as donating to a microscope to continue this vital community work.

Why Warriors’ Founder and Director, Richard Trudgen, is a community educator and author who has lived and worked with Yolŋu people in Arnhem Land for 40 years, learning their language and customs. Richard authored the seminal book, Why Warriors Lie Down and Die, and works passionately and tirelessly together with his local Yolŋu community to increase mutual understanding and respect between Balanda and Yolŋu.