What is good cross-cultural training? 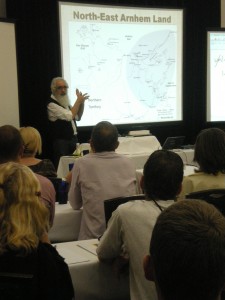 Cross-cultural training is a difficult subject to talk about due to a whole range of factors. One of the main factors is that many dominant culture and Aboriginal people now carry psychological scars or defensive attitudes that have become an entrenched natural part of their life. Many also use names for the other group that stereotypes the other group into a incorrect box.

This naming is born from the survival and justifying[1] relationship that has developed between the two groups from the very early days of settlement and has been handed down from generation to generation. The transferred memories and pain and the stereotype names these people now carry are cemented into the contemporary cultural fabric of both groups.

Sadly, the fact that Australia is a nation built on colonialism means that these often unrecognised attitudes and pain exists and are now carried by many people.  In many cases, they are carried by people who would not want them anymore if they were conscious that they were carrying them. They become like roadside bombs ready to take out valid and also innocent targets as people from both sides of the cultural divide come together on the road of relationship building.  These attitudes are also there in social gatherings and surface in the workplace or when dominant culture professionals are providing public and other services to the other cultural group. Sometimes they surface with dreadful and even deadly consequences; most times they just cause an uneasy, unproductive presence.

Good cross-cultural trainers can bring whole groups safely through a shared experience to the other side where a new day and new positive relationships become possible.

Without good cross-cultural trainers who know this pain and the stereotype naming well, this experience cannot occur. The trainers need to debunk the stereotype naming and defuse the negative attitudes replacing them with good reasons to be different. If this is not done in a sensitive way, then the attitudes and the effect of the stereotypes and assumptions will continue to surface at the community and workplace interface when people least expect them, destroying relationships and putting people in conflict with each other. Well trained and experienced facilitators are essential.

So, is cross-cultural training needed?

A lot more needs to be done to equip dominant culture people who have had little or no cross-cultural experience, as well as those who have had a lot of experience, but continue to carry their childhood entrenched attitudes and scars into the modern multicultural work place. Good training experience can also help many Aboriginal people who still carry the generational scars and self experienced pain with the resulting attitudes these experiences create.

I grew up in rural central NSW where the cultural interface is hard, raw and destructive, yet at the same time false and covered up. I know the worst of these attitudes from my own dominant culture experience and carried them with me for many years of my adult life. I was lucky also to have a mother who always fought for the underdog. So a strong streak of justice also grew within me. These experiences, together with the many hours of training from Yolŋu people has brought me to a new exciting relational space where many of these issues have become very clear.

Many people recommend cross-cultural courses or the standard ‘cultural awareness’ courses. Although at times I still may use these brand names, so people know what I am talking about, I moved away from the general format of these courses twenty years ago, because I saw them doing more harm than good. People with childhood nurtured and developed cultural biases and pain need to be intellectually challenged without reinforcing the biases that are already there and adding salt to the wounds. This needs to be done in ways where they are carried along in an experience where they can safely question and discover old strongholds and encounter new and exciting frontiers and opportunities.

The destructive ‘them and us’ card

Many cross-cultural courses do not do this, and either play the ‘them and us’ or ‘it is all the white fellows’ fault’ cards. When this happens, any dominant culture person carrying negative biases will leave the course with their biases reaffirmed and ignited with fresh vigour.  They will return to the colonial frontier in a ‘them and us’ survival mode, holding on even stronger to their defensive attitudes. This is because the course has pocked and scraped at their scars and reinforced their stereotype naming. For them, the course offered nothing to replace or really question or explain what is happening at the complex human interface.

Many times you can see this happening in the course itself with the participants taking their respective sides, fighting each other across the room during the training. Some facilitators do not see this as destructive; in fact they think this is good or helpful in some way. This is because they are being fed with the negative food of revenge for past wrongs, by getting back at people from the dominant culture.  They are not teaching good cross-cultural understanding and skills.  In fact, they are workshopping and therefore reinforcing the very things they are supposed to be replacing; they are practicing racist reinforcement.

Keep it simple to tick the box

Other courses are so simple and short that they also affirm many of the negative dominant culture stereotypes; for example, that Aboriginal people are simple and primitive.  Some courses are as short as one hour. One hour and four hour courses are designed by people who must think that Aboriginal and other Indigenous cultures (and the very complicated interactions that go on between them) are so simple that it can be covered in one to four hours.  Many of these courses are run this way so all can feel good that something has been done to advance the situation. At times it is done this way so the departmental box can be ticked so it says, “Our people have all done a cultural awareness course”.

I say to people who propose such training, to stop insulting the culture that is the centre of the exercise. I have spent 40 years living and working with the Yolŋu people of north-east Arnhem Land and I am still learning. A good course should take a day or two. To do it properly there needs to be a number of different opportunities to learn more and more.

What people need is good understanding of the “why” behind the cultural divide. They need to learn that all people have culture, including themselves. Yes, it is good for them to know some of the particular differences between their own culture and the other culture, but more importantly they need to learn how to discover these differences themselves. They need to become open to knowing that there is more than one way of doing things, and that these different ways are in general, all okay.

They also need to know why the problems usually continue to exist. This means teaching human dynamics, community development and communication theory in a practical and down to earth way. Through this process they will discover as much about themselves as they do about the other culture. When this is done in the right way it can be an exciting and life changing, empowering experience for all involved.

Other people with deep scars need special help and a chance to experience truly intellectual reasons as to why the pain was inflicted in the first place. Good cross-cultural courses can be a step towards this.

Good cultural awareness and cross-cultural training can equip people to work in the minefield that exists between two cultures, dealing with past hurts and entrenched attitudes. They build skills to work in these environments and return unscarred from the experience, but the courses need to be assessed. If they create the negative outcomes mentioned above, causing more problems than they solve, then they should be removed and replaced with courses that build and heal relationships in the cross-cultural domain.

[1] As it is generally known, in the very early days of Australian settlement there were many killings on both sides of the cultural divide as the two groups fought over land and the limited resources on them. Few Europeans and many Aboriginal people were killed. It is not normal human behaviour to kill other humans and those that did participate in or who supported such actions often justified their actions by naming Aboriginal people with names that were derogatory and dehumanising.

Madayin Law System; The Assent law of the Yolŋu of Arnhem Land