Why learn an Aboriginal language? 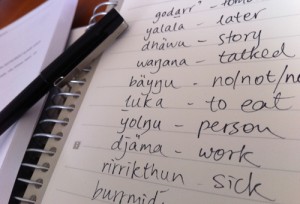 People have asked me the question: “You have talked about the importance of (learning) language, but is this possible considering the diversity and variability of the Aboriginal languages across Australia? How can we bridge this communication barrier?”

Yes, it is true there are many languages, and sometimes there can be several in the one community or region. In fact, many Aboriginal people now speak some form of English as a first language. For many, this Aboriginal English has a grammar structure like their original Aboriginal languages that they cannot speak any more, so it is quite different to mainstream English. However there are other groups of Aboriginal people in “isolated” areas that still speak and think in one of the Original Australian languages, and generally these Aboriginal people often understand several Aboriginal languages. For most of them, all forms of English are still a very foreign language. These people often have a common language that is understood across a large language region.

The fact is, if we are going to communicate effectively then we need to be able to speak to people in a language they understand. A fact not lost on the European Economic Community (EEC). Under the rules of the EEC doctors are not allowed to go and work in another county in Europe unless they can speak the language of the host country. And English is a related language to many of the EEC languages in Europe. But in Australia people come to work in Aboriginal communities with no such requirement, where English and the Original Australian languages have no commonality whatsoever. This is why I would suggest, that many of the health and other statistics for these communities do not change – in fact in some cases they even get worse – and it is also a major factor in why education and training fails. So we waste opportunities for good or better communication to occur and then  blame Aboriginal people for things not working.

I was forced to learn language when I arrived in Arnhem Land 40 years ago and I believe it should still be the policy today. In fact it was the one thing that has kept me here; once I knew a little bit of the language my relationships developed so fast with the people that I could not leave. Just the other day a medical doctor asked me could I explain in Yolŋu Matha (the language of Yolŋu people) what cancer was? My response was, “No problem”, as I had done it over the phone for a female Yolŋu patient just last week. That patient was beside herself in fear before the conversation. She did not understand what cancer was, what the DNA testing was about, or what the treatment options were and how they might work or not. And because there is a lot of confusion about this whole subject within her language group she was even being given misleading information by other Yolŋu. She was ready to go home and die. After a 20 minute conversation she had a clear picture right down to the DNA level. How? By us discussing her condition in an Australian language that she understood; Yolŋu Matha. We have no problem going down to a deep biomedical level in the original Australian languages. They are very powerful communication tools that are just being brushed aside because of what I believe is a neo-colonial mindset that is still very strong in modern day Australia.

So, start by looking at the area you want to do the most work in, and learn that language. Stop being a dominant culture nomad and work in one region. Even if you are working with Aboriginal people who speak an Aboriginal English, you need to learn some of their language if you want to have better communication.  Try and learn the language that has the most resources in a particular region. You don’t have to become an expert – very few English speaking people become truly proficient. But it would be great if more English first language people would learn an Aboriginal language adding to the skill pool in that particular language region. There is just so much more good communication work that needs to be done.

Many advantages in learning a language

There are many advantages to learning an Original Australian language or even Aboriginal English if that is the region you are in, or going to work in:

Resources to get started

For details about the official language centres around the country visit the Our Languages website. There are also many other organisations out there doing work in different language regions. Some include NGOs like Aboriginal Resource and Development Services (ARDS), Summer Institute of Linguistics, the Australian Society for Indigenous Languages and also some universities like Charles Darwin University. Ask around to find the best language resources.