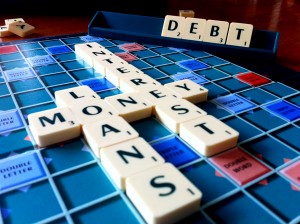 As I mentioned previously, based on our nine years of work in business development with Indigenous families, I think there are four main points that define the process of rebuilding sustainable economies in remote Indigenous communities:

We will consider the final point in this article.

In remote Indigenous communities, it is not too hard to get a small loan if you really want one.  Some banks and credit unions have specially designed loans for people from these communities. And many Yolngu people from east Arnhem Land have tried their hand at hire purchase arrangements.  But some people still struggle with complying to the loan agreements, either not having understood what they have agreed to, or not having the real financial resources to maintain payments.  These are the two fundamental problems with using loans to provide capital to business enterprises in remote Aboriginal communities.  One is a communication and education problem (which other articles on our blog discuss). The other is a simple economic problem.  People do not earn enough to repay initial loans for initial capital investment (see Part 2 of this series).  Let’s say that someone wants to buy a four wheel drive car to start a small business. For a reliable secondhand four wheel drive it will cost them at least $10,000, plus $1,000 in travel or freight costs to collect the vehicle from a major centre and perhaps another $1,500 for some repairs in the first six months.  That means $12,500 in capital is required just for the vehicle.  A loan at a low interest late of 6% will mean $151 a fortnight  for four years.   In Part 2 we learn that a high average fortnightly income in these communities might be about $600. So the loan repayment is 25% of that person’s income over those four years.  After housing rent payments this leaves him or her with only $300 a fortnight for the family.   It’s all good if the entrepreneur gets a good return from the investment after the first year or two, but in the current environment with incomes subsidised by Centrelink payments and the legal requirements for award wages, most income will be absorbed in trying to pay his workers above these thresholds.  Even operating in a cash economy, it is near impossible to pay workers for less than the fortnightly returns received on unemployment benefits, as workers just won’t put up with less than what they receive in unemployment benefits.   Unless a person has access to royalty payments through their clan, what I have presented is a best case scenario for such a loan.

I have seen some success for low income families raising capital through interest free loans (or extremely low interest).  The poor understanding of interest, means that it is not a successful incentive for repayment, so interest free loans are no less likely to be repaid.  In fact where there is a good, established, relationship between the loan giver and the recipient, Aboriginal people are usually very keen to repay the debt, to protect that relationship and future access to credit.    However, loan schemes beware, it is very difficult for an organisation to build the necessary relationship, and only those with a good understanding of the mainstream economy will be reliable re-payers.

By talking about loans first I may have encouraged the assumption that indigenous people do not have the ability to raise their own funds.  This is not the case.  I have found that this is rarely the case for small investments.  Up to about $20,000 entrepreneurs can draw on the income of relatives to obtain investment capital, and sometime when royalties from land use are available they may be able to raise up to about $50,000.  In order to maintain ownership and a sense of self-reliance, it is best to encourage people to use their existing assets.  I do this by ensuring that the possibilities of loans and grants (an absolute last resort) are not even raised as possibilities until the person has assessed and attempted to raise their own funds.  This might include helping them design a saving strategy.  People really appreciate the use of automatic periodical payments to their own isolated savings account to accumulate funds.  These funds then become the basis for any future investment strategies.  However, often for investments over $10 -15,000 the available funds cannot be raised in the timeframe required.  This is when a subsidy or loan scheme should be considered.  All investments over a few thousand dollars also result in significant financial stress, because the income across the community is so low compared to the rest of Australia.   Where a second hand four wheel drive ($10,000) is 20% or less of the average Australian yearly income, it is 60% or more of the average income for Indigenous people in Arnhem Land.  This disparity in the relative income is the key financial factor limiting the developing of local enterprises in these remote townships and homelands.

Unlike countries like India, Australian has a single tier economy, that is, with the exception of the super rich, the goods we buy mostly target the same income levels and price range, there is a single market place, not one for richer people and one for poorer people.  To continue the transport example, in India if a poorer person needs to purchase transport to take goods to market, they can buy an ox and maybe a cart, to travel to the local market.  But a richer farmer can buy a motorised rikshaw or even a truck at a much higher price and this allows him to get goods to the more highly priced city markets.  For low income people in Australia, such cheaper alternatives to the mainstream market do not exist – they have to buy a vehicle (even a second hand one) priced at levels that are set in the mainstream marketplace.

No one locally is going to sell a decent car for half the usual asking price to a Yolngu entrepreneur.  That’s why I argue that the best financial aid for remote indigenous enterprise are subsidies.  Subsidies are distinctly different from grants.  Grants cover the entire or the majority of the capital investments or small business start up needs.  They are usually provided by Government schemes and are essentially a bet based on business viability reports that this is a business that will succeed and bring a net return to the community.  But because they are essentially a gift, they encourage the community’s prevailing welfare based view that the Government is the all powerful provider of their needs, it undermines any sense of ownership in the new asset, removing any sense of success of fulfilment which could come from reaching that investment goal.  It is observed that sometimes businesses supported by grants fail because the business owners do not maintain the new asset, assuming that the Government will just give them another one.  On the other hand, subsidies, which are still a gifting of finance, are provided on the basis that the entrepreneur pays the other 50 – 70% of the item’s cost.  Rather than giving on the basis of a bet on later success, it should be on the recognition that the people living in this community have much less income available to them.  Subsidies are more relational, because they say to the person “we believe that you can raise at least half the funds and we will give you the other half if you do”.  It is a form of investment in the person, but a kind of partnership that leaves the ownership with the local visionary.  In this way it is also an encouragement that says …” someone believes in me.”  It is also an encouragement to save and invest, while making the task not quite so huge, people have less financial stress, and are free to make choices to increase their own investments in other areas of the business it they want to.  But most importantly of all, subsidies (which should never exceed 50%) makes people still feel like they bought the item, that they own the business, and the community sees the effort the business owner puts in to invest into that car, chainsaw,  computer, tractor or shed etc.

Caution is always required: the subsidising organisation or individual must be careful that the receiver is genuinely motivated to run the enterprise.  Subsidies must be relational: the receiver must have some personal contact with the giver and clearly understand the agreement.  At some price level (say over $20,000 or maybe $50,000) subsidies may no longer be appropriate and a partnership (dual ownership) is necessary to honour the value of the investment and the relationship that is created in supporting that persons endeavour.  A partnership of course is also necessary if the investor wants to match more than 50% of the monetary capital needed.  This type of partnership does not mean that the investor must take control of the enterprise to ensure it succeeds. It means ensuring that the entrepreneur is adequately supported, but still allowing some failures (which is how all entrepreneurs learn).

So in a nutshell, appropriate financial aid requires that a support structure exists to help and encourage individuals and families to save and utilise their own resources to get capital investments.  Where the time is unavailable or the income is insufficient, other forms of financial support can be considered.  Grants are the usually the least helpful form of aid, because they perpetuate welfare dependency and undermine the ownership in the business.  I recommend 30 – 50% subsidies for individual capital purchases in recognition of the lower available incomes in most Indigenous communities relative to the mainstream economy. It also provides a relational way of helping financially and encouraging a person in their endeavour, but without undermining their sense of ownership.

To read all the articles in this series please view the learning pathway:  Understanding the Economics of Remote Communities