“Wedge-tailed Eagle we are all dying!” 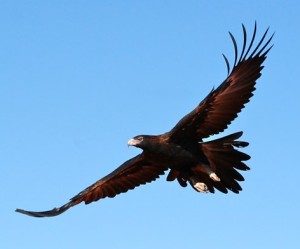 I was sitting in a hospital waiting room to see a specialist and there were a number of Yolŋu present, also waiting to see the same doctor. None of these men and women was over mid-30s. As we sat there talking one of them picked up a magazine and was flipping through the pages when he saw a Yolŋu countrymen who had passed away.

The discussion became very passionate, and a young Yolŋu woman looked straight at me and said, “Wamut, we are all dying.” (Wamut is my skin name meaning ‘Wedge-tailed Eagle’ Many Yolŋu call me Wamut Richard.)

Her direct expression shocked me in two ways. One, she looked strongly and directly at me which is culturally unusual as Yolŋu do not always give strong direct eye contact. It was like she was stabbing me with the statement.

The second thing that shocked me was the depth of despair and fear in the eyes of my Yolŋu friends. It’s true they were there to see a cardiologist in relation to their heart disease. For most people, this would be a frightening situation but with the Yolŋu death rate so high (over 25% of deaths in Arnhem Land are from cardiovascular disease) it was terrifying to have any suggestion that you might be next.

But they just weren’t referring to themselves. They went on to talk about all the people who were dying well before their time. Week after week there is another one or two deaths and so funerals become people’s constant occupation.

We started talking about what was causing all the disease, illness and early death.

And my Yolŋu colleague, although she has a health worker in her family, knew that she is unlikely to ever get the full understanding of her condition and how to correct it or stop it being fatal. Because, as English is not her first language, her doctors Medical English and Western medical concepts are simply not understood.

This always leaves me with a desperate feeling as I speak medical Yolŋu Matha and also have a good understanding of the Western medical information in relation to heart disease, as I have corrected my own condition. Yet almost all Yolŋu health workers or interpreters do not have this deeper knowledge.

The main factor in this lack of understanding is that Yolŋu Matha and English have a less than 65-year working relationship; whereas Pacific Island languages have 180, Japanese/Chinese have 400, and other European languages have at least a 2000 year relationship. English for Yolŋu people is very different in its syllabic phonics, grammar, and worldview construction, yet the language-mapping history is extremely brief and no complete interlanguage resources exist – especially when it comes to resources for medical or legal language.

Yolŋu have been left to sink or swim in an English speaking world and very little government funding is being applied to try and help close the language gap. If we do not close the communication gap then the disparity in other statistics will not close either. Good communication is the basis of everything.

Why is that in a country so rich like Australia the First Nations People like Yolŋu need to suffer so much because the mainstream Australian community just does not understand how difficult it is for them to understand mainstream English?

I knew if I had the time and resources to discuss with every patient in that room, in a way they could fully understand in their own language and worldview, they would be likely to live much longer than they are going to. And the government would save a lot of money on the whole exercise.

I started to explain heart disease and discuss some of the actions they needed to take. Unfortunately, the education session was cut short, as I was called in to do my tests and see the specialist to check my own condition was under control.

So while my heart condition is managed and I’ll probably live longer than I need too that’s not so for my Yolŋu colleagues, who will probably not even have a chance to nurture their grandchildren.

Why Warriors is looking for partners that will provide us with the backing to produce a series of health videos starting with:

As evident in the story above there is an urgent need for Yolŋu-friendly educational resources that can speak to Yolŋu in their own language and through their worldview.

We have over 35 years of experience consulting at the doctor-patient interface in Yolŋu communities and have developed good bio-medical explanations in Yolŋu Matha for most medical conditions. Our team also has a successful track record in producing effective educational videos on health topics for Yolŋu people.

If you know of anyone who would like to support this important life-saving project, please please contact us now.