Responding to Violence in the NT: the usual ‘get tough approach’, or a different way forward? 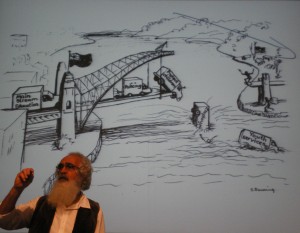 Richard Trudgen, author of Why Warriors Lie Down and Die, responds to media coverage of recent violence in NT communities:

Richard Trudgen, author of Why Warriors Lie Down and Die, responds to the ABC news on the recent violence and crime in the NT communities including Alice Springs.

Statements like this are helpful, but what is going to change in our response to see long term sustainable outcomes occur? It seems to me we have two options open to us.

One option is to keep doing things the way it has always been done – get tough, offender focused, short term focused solutions, that only give lip service to underlying causes.  There will be a lot of mainstream public commentary about how we need to get harder, get tougher and force the people to comply with the mainstream way.  The NT community will become more polarised across the cultural divide and the result will be an increase in violence and crime.

We will continue to see Aboriginal people destroying themselves and creating havoc in the process.  Many will complain about the violence and crime, and the offenders will be arrested and jailed. This will mean building even bigger jails than are now planned. Little will be done to try and understand why Aboriginal teenagers and young adults are turning to a life of crime while many of the older people are just giving up.

Option one seems easier, because mainstream Australian society has been doing it for two hundred years. In the past it was called forced assimilation – but it didn’t work then and it won’t work now.

There is another way. We need not have a future of divided fighting communities – this is why I will keep advocating a way that is different – a way that works and can bring stable economic and social development that includes everyone.

Option two, is the only way to deliver long term sustainable change.  We need to move to policies where Aboriginal citizens are seen as key stakeholders at the centre of the crisis. We need to work with them, empower, equip and build capacity within their communities, so they can move from a crisis of living to a state of equality with other citizens.

But for this option to be viable, mainstream Australia will need to learn and understand many things about the crisis not usually understood or talked about. They would need to understand the dynamics that exist between mainstream Australian society and the Aboriginal people. When the dynamics are understood, the road to long term, sustainable change is much easier to see, understand and deliver.  When real consideration is given to inter-cultural complexities that Indigenous people face every day,  programs and policies will merge with the real needs of Aboriginal citizens, so they will be ready to take them up and participate in them.

When we can see the real cause to a problem that is in front of us, we are three quarters of the way towards finding answers. Now, many mainstream Australians will say that they understand the “problem”. I have had some people who live in the NT tell me that they know the answers to the “Aboriginal problem” and here lies the real difficulty. Just having lived in the NT does not mean we understand anything about Aboriginal people, or the dynamics that exist between the two cultures.

Let me give you an example:

My own father was an alcoholic and he caused hell for himself and our family many times. Some family members just hated him for what he did. I never liked his drinking, but I always wondered why he drank like he did. Now I know there are many factors behind his drinking. The other night I sat and watched “The Long March”, on SBS TV.

This was when in the dying days of World War II, Hitler ordered all the prisoner of war camps in Poland and other countries to be emptied, and the prisoners of war (POW) to be marched back through Germany.

No one was ever sure why this was done, but it meant that some of these POW marched over one thousand kilometres in truly inhumane, freezing conditions. When morning broke, some of their colleagues did not move and were left there. Some died beside the road, or were taken off and shot. They had little food and their boots would freeze hard by the morning.

Dad was one of these POW, and at times he had talked about the “long march”. He had even said to me a number of times that he had recurring nightmares about his capture, the time in the prison camp and the long march.  The long march got more mention than the other experiences, but I had never realised really what the “long march” was – until the other night. I had not lived enough of it from the small bits that Dad would tell me. I now know it was too hard for him to explain it all to me in a way that I could really understand. I felt horrified watching the show as I now know that I really never understood. Now it was much clearer why this experience was a major factor leading to Dad’s excessive drinking.

Today we also know of post traumatic stress disorder (PTSD) and its effects on people. The SBS program showed how this experience had affected many of the POWs; some never got married because of it. If I had more understanding, the chances are, I could have been much more useful in helping my Dad work through the issues.

Aboriginal people do not just decide to get drunk, sniff petrol and cause absolute hell for themselves, their own people, and everyone else around them for no reason at all. Like my father, they are driven to it by forces and factors that the majority just do not understand.

The level of social disobedience we are now seeing in the NT communities is without precedence and there are driving forces behind it; human forces. You might expect that I would now tell you about these driving forces. I could talk in general terms about them, but that would be just like me getting bits and pieces from my dad; and I never really got it.  So some will say that it is all too hard – “we can never understand these forces”, but I say, they can be understood, but not easily…. through listening, deep dialogue, and a critical analysis of the human experiences.  Through understanding them a clear way forward can be found.

In short, it is not an “Aboriginal problem”, but a “human problem”, with human answers. Whenever two groups of people with different languages, cultures and aspirations come together, many of the same issues can be found; issues that cause division, resistance and outright opposition.  We can continue to apply option one, with its simple solutions until the people are completely broken – and suffer the consequences. Or we can try option two: understand the human issues and then change to empower the people and harvest the fruits that will grow into the future from this new way of relating.

When this way of relating is achieved, we see the re-emerging of the wisdom of  a 40,000 year culture – the oldest surviving culture on earth. That it has survived longer than any other culture on earth should say something in itself; it has sustaining strengths in it. If only we could learn from it and tap these strengths, this would provide genuine and authentic answers to the NT “problem”.  Programs that are designed and carried out through genuie understanding give Aboriginal citizens real access to information and knowledge, so they can understand how the new strange world around them operates and they can mobilise and modernise their culture where applicable.

Realising the integrity and depth in the original Australian culture represented in the NT is major part of  building real understanding.  As we achive this understanding we can move to put in place policies and programs that change things for the long term good, building on that depth and strength. There are ways of doing this, and such programs have been and are still in practice in the NT over the last 20 years. Unfortunately though, they do not always received good support; due I believe to a lack of understanding.

Why Warriors runs a two day “Bridging the Gap Seminar” to work through many of these underlying human issues. It is a bit like the SBS program was for me in relation to my dad. A lot of people who attend, talk about how they did not understand the depth of the issue, but having understood them, found new ways to change their own behaviour and see ways to work that empower Aboriginal people.  Understanding the issues is an essential and key part towards finding the answer.  This seminar is run by myself, Witiyana Marika and Dianne Gondarra.

As I see it, option two is the only way forward for the NT. To get there, mainstream Australia need to have this new understanding first, because it is mainstream Australians that have the control over whether things continue as they are – or whether we get smart and move to a new formula.

On being income managed