What Happened to the Second Bark Petition? 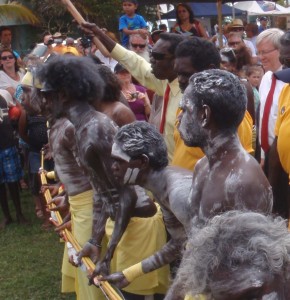 This week is NAIDOC Week and this year’s theme is focused on the 50th anniversary of the presentation of the Yirrkala Bark Petition. It is a good time to remember the bark petitions that continue to be ignored.

In 1963 Yolŋu Elders of north-east Arnhem Land presented the first petition to the Federal Parliament in an attempt to get the Parliament to recognise that Yolŋu people had a system of land ownership that predated European settlement. This law was part of what Yolŋu call their Madayin Law.

The petition was successful to a degree in that it did lead to a royal commission and Land Rights and the petition was placed in a place of honour in the Federal Parliament. But from a Yolŋu point of view Land Rights has brought them some rights, but not the control and autonomy they expected and were used to under Madayin Law.

Land Rights came in a form of law that was and still is very foreign to them, and the whole process of control on a daily basis is in the hand of the Lands Council that is run mainly by dominant culture people. So in 1998 a second bark petition was handed to then Prime Minister John Howard in an attempt to start a diplomatic dialogue between the political leaders of the Yolŋu people and the Australian Parliament (content of this petition is below).

The Yolŋu Elders/political leaders believed if they could get their Law recognised then that would return real control to them in relation to their estates and solve most of the other problems they were facing on their communities.

But what happened to this petition?

It seems that John Howard did not take it seriously and it got stored away in a place where the gift collection was kept. The petition was not even tabled in Parliament. The Elders/political leaders waited for years to receive some form of response but it never came.

The giving of this petition was never released to the media because the Elders/political leaders said it was a diplomatic discussion that they wanted with the Australian Parliament and that diplomatic discussion should be kept between the two parties. But as nothing has occurred, and many of the Elders that signed it have passed on, I think it is time the question is asked … What happened to the 1998 Bark Petition?

Sadly, it seems that the dominant Australian culture cannot take the original Australian Law of this land seriously; that is Aboriginal Law where it is still practiced. The dominant mainstream Australian culture sees all of Aboriginal society as ‘culture’, and this ‘culture’ is great as arts and craft or dance, but not as Law. The Australian Government, on the Australia.gov.au website, celebrates the various bark petitions given by the Yolŋu people, pointing out that the Yolŋu people were requesting recognition of their Law. But the action of successive governments is a silent slap in the face of such requests. Shortly after this petition was given, Native Title legislation was watered down and later the right to have “customary law” recognised in criminal cases in the Northern Territory was removed by the Howard Government (and the prohibition was recently strengthened under Labor’s “Stronger Futures” legislation).

While undermining their system of Law, at the same time everyone wants the ‘problems’ in Aboriginal communities to be resolved. As a community development worker, I was taught that you can never have development without security of tenure and a Rule of Law.

The Original Australians of Arnhem Land still practice and assent to their own First Australian Law, as they have since time began, but are being forced to live in a state where their legal status and property rights are always questioned and degraded to the status of ‘culture’ or ‘custom’. Little wonder the communities have trouble moving forward, when the “Rule of Law” is treated as a game even by the Government, although Justice Blackburn in the 1970 in the Gove Land Rights case identified the Yolŋu systems as a “Rule of Law”.

It seemed this is what happened to the second bark petition, despite the elders talking of their system of Law, the Madayin, three different levels of governance and their original title deeds. John Howard saw it as little more than – “let’s all get together have a sing song and give each other paintings” – culture. The petition was never even tabled (as a legitimate petition should be) by the then Prime Minister and was not taken seriously.

Is it all just too much for most dominant culture Australians to believe for a moment that Aboriginal people had a complete socio-economic political system that is more than just culture; systems that might even be worth knowing about?

We live in a time where complicated technical systems and medical things can be studied and understood but the Original Australian Law cannot. So we demonise and degrade it to the status of ‘culture’ so we can ignore it, and even hope it goes away. Meanwhile the citizens of this Law are forced to live their lives under a code of law that came to this land with the first ‘boat people’, a law that jails them and takes away their security, protections and rights. Is it not time that we begin discussions that take their Law seriously as the Yolŋu have requested?

Richard Trudgen:   Secretary and translator for the Elders of the 1998 Petition

We, the undersigned, are dalkarra and djirrikay (the political representatives and leaders) of our sovereign clan/nations comprising all the Yolngu (Aboriginal people) within this Miwatj region of North-East Arnhem Land.

We bring to you our diplomatic request
from: the Ngarra’ /traditional Parliaments of our clan/nation estates
to: the Parliament of the Commonwealth of Australia.

We request that you recognise:

1.     the Dhulkmu-mulka Bathi (Title Deeds) which establish the legal tenure for each of our traditional clan estates.
Your Westminster system calls this Native Title.

2.     the jurisdiction of our Ngarra’ /Traditional Parliament in the same way as we recognise your Parliament and Westminster system of Government.

3.     both formally and legally recognise our Madayin system of law.
Within our Madayin there are three different levels of Government that provide for the peace, order and good government of the people/citizens:
i. Open or public ceremonies where all citizens may be present.
ii. Semi-Public chambers of law where only certain parts of the legal procedures may be conducted in public;
iii. Closed / restricted chambers of law which may only be attended by those political leaders who represent the citizens.

The colonisation of this land and the imposition of a foreign system of law has not prevented Yolngu from holding, maintaining and continuing to assent to our traditional system of law. This is our Common Law right which the High Court of Australia has partially recognised. As citizens our rights must be protected at law.

In the face of many imposed obstacles and pressures we still continue to educate our children and future leaders, manage our estates, engage in economic and diplomatic exchanges between clans/nations, discipline offenders, care for our sick and elderly and practice hospitality to foreigers who live on or visit our yirralka (estates).

There must be dialogue between the two systems of law because Yolngu law, like your law, is based on the key principles of magaya (peace and justice), dhapirrk (consistency between different levels of law) and wana-lupthun (the assent of the rom-wataŋu walal/citizens, to those laws).

We extend to you, the Honourable Leaders of the Commonwealth of Australia, our invitation to come to a meeting where we can discuss these issues in much greater depth so that together we can forge a partnership of co-operation and dialogue based on mutual trust and respect for each other’s law. Without this recognition we will live in perpetual dependence in this land that is ours by birth right, silenced and oppressed by a foreign system of law.

Presented to the Prime Minister, the Hon. John Howard MHR, at Yirrkala on 27 February 1998 on behalf of the following clan/nations of the Miwatj region:

Another Indigenous voice from Arnhem Land