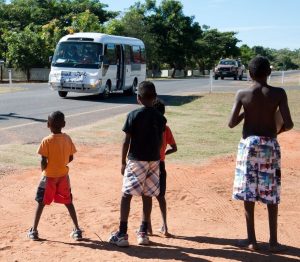 Wondering why the attendance rates of schools are so bad? Just do something about equipping teachers who come into the classroom of Indigenous kids, with language, and you’ll see immediate results within one or two years. With attendance at that school, and the outcomes of those kids. Because we need to learn Australian to speak to Australians.

After the ABC released a story on the fact that only one third of indigenous children attend school each day, I’ve reflected on this question asked by many across the country: “What educational good can come out of learning an Aboriginal language?”

I’ve also heard it on the phone from school teachers in tears. They tell me, “I’ve been trying to get the Education Department to give me time to learn an Aboriginal language so I can really communicate well with the students in my classroom.” And they don’t get any response.

This is where the mainstream subconscious bias takes over and many people see Aboriginal languages as primitive and backwards; that there is no educational advantage to learning one of the original Australian languages. I have teachers tell me:

“I can’t control the classroom. I can’t even tell the kids, ‘Hey! Can everybody listen up, can everybody do this? I can’t even give them simple commands in the language that they understand. So, most of the time they just start talking to each other or signing to each other in their language. They’re communicating with each other and I’m trying to cut across it. But I’m outside their communication bandwidth so to speak. They don’t even hear me.”

One time my son was helping in a classroom, working as a teacher’s aide. He spoke Yolngu Matha, but the teacher at the front did not and she was trying to get the attention of the class. She tried for ten minutes but the kids were all talking to each other about what they’d done on the weekend. My son just sat there and let it happen because he wasn’t supposed to participate as a teacher, he was just supposed to help a couple of students who needed it. But after ten more minutes he said:

They all just fell silent and looked at him. He was able to give this simple command and they responded. Then he pointed to the teacher at the front. And they all looked at her, expecting something. But they were disappointed and shocked because she just broke down in tears and ran from the classroom.

We’re sending teachers into a foreign culture and we wonder why it’s costing us a fortune? It costs anywhere between $140-200,000 to recruit and put a teacher into Indigenous communities and we spend so little on helping these teachers even learn how to give simple commands in the classroom!

There’s a lot more they could do with the language too. They would also start to learn the culture of the kids they are working with, because as soon as you start to learn language, you start to learn the culture. And then you then have a greater ability to be able to speak with their parents. Parent nights in Aboriginal communities almost don’t exist because the teachers not only can’t communicate with the students, but they can’t communicate with the parents.  Aboriginal people in these situations are doing their best to communicate across the gap, between their language, Australian, and in English. Their Australian is not understood by the teacher who comes from Australia.

We need to be doing this better. We can be teaching people language, to go out there better equipped. They will never learn all the language, but they’ll learn some of the commands and they can concentrate on even some of the concept language. So, if they’re trying to explain a particular thing like ‘osmosis’ they can find particular terms in the Aboriginal language to be able to explain it in seconds. Yes, osmosis in seconds in the original Australian language! DNA is something we can even talk about in three minutes with a few good images and language these days. So, the subject level is not a problem. The problem is the mindset of people high up, both political and professional bureaucrats that have this viewpoint that no good can ever come out of a ‘primitive Aboriginal language’. That’s the derogatory naming from the first settlers. And that is the problem – that derogatory mindset. Rather than seeing opportunity and the way that the future can be changed here, by equipping teachers to speak the local language of where they’re going to. And guess what, some of them will become very good at speaking the local language, and then they’ll stay for years! And it won’t cost the fortune that it’s costing now, with teachers coming and going, coming and going. One Yolngu assistant principal said to me, when we were talking about this subject:

“Richard, I can’t even keep up with the teachers who are coming and going. I don’t know how any of the kids in the classroom can keep up with it.”

We’re all wondering why the attendance rates of schools are so bad? Just do something about equipping teachers who come into the classroom of Indigenous kids, with language, and you’ll see immediate results within one or two years. With attendance at that school, and the outcomes of those kids. Because we need to learn Australian to speak to Australians.

Listen to our latest Q&A in relation to this topic here: https://www.youtube.com/watch?v=5pp4CqHSauY