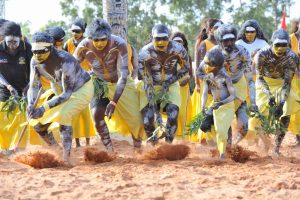 This speech was delivered to Warramiri Cosmology Conference at Charles Darwin University by Dianne Biritjalawuy Gondarra on 21st February 2019. It was translated into English by Richard Trudgen

Thank you, everybody, for the opportunity to speak to you about my Yolŋu world and culture.

First, let me explain the meaning of the word Yolŋu.

The word Yolŋu means a human being, so when we talk about ourselves as Yolŋu we’re talking about our humanness, our identity, what makes who we are.

And it might surprise you, but the first thing I think about as to what makes up our humanness and identity is structure. It is the structure within our culture which gives me a defined role and purpose and that also gives me security, comfort, and protection.

This structure in our life is built on foundations set at the creation, which we call the djlkarri, the beginning or the foundation of time. This was when the first human Yolŋu footprints were made on our lands. It is also the time when our Rom Law was given to us by the ancestral beings.

These ancestral beings were the two Djangkawu sisters who were the Dhuwa female creators, and Barama, the male Yirritja figure. They came and created and taught us all we needed to know. These creators were sent by Waŋarr, The Great Creator Spirit. Because of this, we know the ways of these creators were good for us and the world around us.

The gift of life is given to us by Waŋarr, The Great Creator Spirit, so we can be a blessing back to Waŋarr and to others around us.

But let me explain some of this structure, which many call culture without really knowing what it is. In truth, to do justice to this structure we would have to talk for a very long time. Maybe even many years. So, let me just show you some of it.

Our world is made up of two halves, Dhuwa and Yirritja. They are called moieties.

And as we move across our estates, we move from Dhuwa to Yirritja, Yirritja to Dhuwa, as we cross different land boundaries. Nations clans are all divided into either Dhuwa and Yirritja. All clans also own different songlines and the songlines the men are singing while the women are lamenting are either Dhuwa or Yirritja.

Dhuwa and Yirritja is an interrelated structure. It is like a template that fits over all elements of our life.

Then there is another interrelated structure that melts into the Dhuwa or Yirritja structure and that is the gurrutu kinship relationship structure.

Gurrutu is divided by Dhuwa and Yirritja. I am Dhuwa Yolŋu woman and I follow my father’s Dhuwa line.  When I look back at my mother’s line I see different Yirritja and Dhuwa people right back to my great-great-grandmother. This Dhuwa or Yirritja pattern is overall our relationships. As mentioned, it is over everything.

So, my whole life and existence has a predetermined structure which gives me courage and makes me feel strong and safe. I have a place, I belong somewhere, I fit into the Yolŋu human society which is my taught and lived experience.

Within this human society, I am connected to everyone else and everything around me from the plants, the animals, the land, the sea and the stars above me.

From when I was a young child I have learnt the roles and responsibility to live within this structured human society. In relationship terms for some people, I am their mother, whether I’m really their biological mother or not. So many will call me mother and I will call them waku child. That is the relationship we relate to each other through. They will treat me with the same respect and courtesy they afford to their real mother and if I have to I will look after them as I would my own children.

Though this may be confusing to many it’s more important to see these roles as defining our responsibilities in relation to those other people.  This system covers all Yolŋu people across north-east Arnhem Land. So even people that I have not yet meet, I still have a relationship with them.

These Gurrutu, relationship roles, and the responsibility not only cover the people I am related to but also cover the yirralka estates that the same relationship terms are applied to.

That is my Mari grandmother’s people, on my mother’s side, are my Mari and also their lands and clan are called my Mari lands and clan.

Each one of these relationships affords a special relationship, powers and responsibilities between me and the other party.

My mother’s people are the yindi – the big people in my life, and I am the yothu – child who is born from them. From birth I was taught about this and all the other relationships.

It is also the role as a grandchild to check “due process” in relation to issues of the law relating to grandmother and my grandmother’s clan, on my mother’s side. This is especially so in relation to all their legal interests.

My Mari grandmother also has very strong legal responsibilities and powers to intervene in my life if my life is in danger. Some people call this the grandmother’s law. That is my grandmother, on my mother’s side, and her brother and members of their clan, in that same relationship, can step in on matters of domestic disputes or if other dangers come my way. This over-arching care and responsibilities is there from when I’m a small child till the end of my life.

So as a child I am cared for and protected by my own clan, my grandmother’s and mothers people on one side. While on the other side there is the Yothu clan, the children born to the women from our clan, and people in a grandchild gurrutu relationship to me. Five separate Yolŋu clans have the responsibility of care to me as a Yolŋu child and as an adult. Nobody can dispute their different authority, rights and responsibilities to me as a child and as I grow up.

This same authority and responsibility are there throughout my whole life.

This system of responsibility and care covers all our relationships. From the people and the land, and even the conservation of animals, plants, fish and birds. It is a system of Law which teachers respect and honour and stops people jumping in where they have no rights.

This culture I’m talking about is one of the original Australian cultures, yet sadly not many Australians, including governments, understand it. And because most Australians are ignorant of it many of the things that are done today undermine it and even destroy it.

All our law comes together in what we call the Madayin system of law. This system of law was gifted to us by Waŋarr, The Great Creator Spirit. It spells out the authority in the relationship structures above and also who are the true owners of different assets across our clan yirralka estates. It defines private and corporate rights and creates a state of mägaya.

There are so many different words in Yolŋu Matha that are hard to explain in English and mägaya is one of them. But we can use all these English words to try and explain it; peace, tranquillity, harmony, completeness, health, peace, prosperity, fullness, perfectness, rest, safety and absence of agitation or trouble, protection for all.

It would be good if we could move past the situation where we just see Yolŋu culture as just ‘culture’, rather than systems of protection, nurture and care. A system of nurturing and caring that covers the lands, the animals, the plants on those lands and the fish in the seas. A system that is a true system of law that can bring peace and prosperity to the Yolŋu communities and to Australia as a whole.

Our culture has systems of law structure that are as old as the Australian continent itself.

The Basic Parameters of Yolŋu Law and Governance explores the Maḏayin system of law and provides the essentials of Yolŋu governance.